Break Down the Organizational Boundaries of Data and Competences

Birgitte Dahl has written a column in Computerworld, which addresses three challenges that companies face in relation to data projects. The two can be solved relatively easily, but the third requires that the functional boundaries of data and competences are removed.

For several companies, it’s difficult to execute data projects. There is simply too much at stake that indirectly counteracts the activities which must be undertaken in the execution of a data project.

Regardless of the business industry and the purpose of the data projects, there are in particular three challenges which companies face. The first two challenges can be solved relatively easily.

The third challenge, on the other hand, can’t be solved by the project team. It requires to rethink the traditional organizational setup, in order to access data and skills available for the organization in practice.

The functional boundaries of data and competences must be removed.

The typical situation is that there is too much eagerness to get started with executing the data project.

Most often, attention is focused on the data science work, the technical platform and how the results are to be virtualized. As a result, the data project comes on a sidetrack and away from what should be the starting point.

The project team must first and foremost have a clear understanding of the purpose of the assignment.

It often requires a solid effort because the project team has participants from different disciplines with different competences and insights, and therefore their starting point and understanding of a task are rarely the same.

Challenge 2: The Data Foundation for the Project is Doubtful

Another typical challenge is that the project works too narrowly in its choice of data.

More often, only data from your own field is applied. As a consequence, the project team quickly concludes that the questions can’t be answered with data analytics.

Drawing on this conclusion without fully having made the necessary data analytic considerations, new opportunities will be missed.

It’s necessary to verify whether the necessary data is present and whether it fully comes into play in the quest to answer the questions asked.

It must be based on data science and statistical method. In addition, the project should consider whether there are other and better data to include in the analysis before giving up, even if this data isn’t available for the company right now.

From an organizational point of view, several companies are challenged due to the lack of sharing resources and knowledge, as well as the capability to collaborate across functional areas i.e. departments or companies.

This often becomes a natural derivation of a performance culture and use of KPIs, which is limited to measuring the contribution to your own functional area.

It hits data projects extra hard because data has no functional boundaries.

Most data analytics projects need data and resources with knowledge of data from other functional areas than where the data project is rooted. But there is often a reluctance in the organization to contribute to the data projects of others.

This significantly slows the progress of the data project, and in the worst-case scenario, the data project continues without the relevant resources, with the risk of poorer and more expensive project implementation.

Although top management establishes strategy projects and there is a general understanding of the company's overall priorities, execution is carried out at the operational level, where in practice, every day’s KPI-driven priorities are in focus.

It’s not straight forward to release one of the critical resources to a colleague’s project, or sharing the critical data with others, if the data project doesn’t support bringing any achievements in return to the department, or as an employee isn’t rewarded for deliveries outside his or her department.

Organizational rigidity must be loosened - both structurally and individually.

The responsibility of the leadership: At the structural level, it’s necessary to establish other ways of calculating performance so that interdisciplinary collaboration is more profitable - for the managers and the employees.

At the individual level, the challenge is further that only the few in an organization thrive on frequently changing tasks.

The visibility of what an employee will be dealing with in the future is short. Therefore, there must be a higher degree of security for being rewarded as an employee for his or her contribution to the company, also when it’s in a different functional area of where he or she is employed. 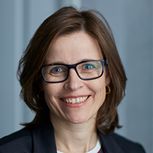 THE STRENGTH LIES IN THE PERSONAL MEETING

If you want to know how your company can get the best start with your data project, contact Birgitte Dahl.

Rooftop Analytics has many years of experience with both predictive analytics and project management. With our experience, we manage to be at the forefront of the many challenges the company - and the leadership team must solve, to implement front-run solutions, where predictive analytics plays a significant role.

Supply chains can be optimized by increasing the transparency of data between all parties within the supply chain.

Get started, invest time, and mature in the ability to leverage data. See what it takes to evolve.